Immediate past General Secretary of the Nigerian Bar Association, Jonathan Gunu Taidi has questioned and proffered solution to the melt down that engulfed law pratctice in Nigeria — a direct consequence of the closing of courts by judiciary workers.

In a statement issued in Minna, Mr. Taidi said “The over two months old suspended strike of the Judiciary Staff Union of Nigeria (JUSUN) left lawyers financially handicapped as clients suspended their financial obligations. Our court rooms across the country were for the first time under lock and key for non natural cause which made it more devastating than the Covid-19 induced lockdown. This also left the litigating public stranded.

“As a result of this negative impact on the lawyer and the litigants, the intervention of heads of courts by way of Practice Direction to suspend default fees and penalty payments which accrued during the strike period will go a long way in ameliorating the heavy financial losses occasioned by the court’s closure.

He explained that “There is no doubt that the court dockets have exceeded saturation point due to the Covid-19 pandemic and attendant slow adaptation of technology and the pile-up due to the strike action. The best and only way to clear the backlog is by soliciting for the understanding of their Lordships to embark on a staggered 2021 annual courts vacation to cover up for the period of the strike action in order to compensate for the already truncated months as a result of the strike.

“This will go a long way in aiding Lawyers, old and young at the bar, get back to their Practice.

JUSUN had begun a nationwide strike on Tuesday, April 6, to demand financial autonomy for state judiciary. The union had directed its members across the federation to shut down all courts after the expiration of the 21-day ultimatum earlier given over the failure of the various state governments to implement the law. 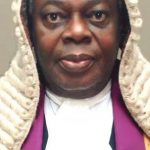 HoR Speakership: Yoruba Youth Group drums up Support for Gbajabiamila
YCYW believes that Hon. Femi Gbajabiamila will bring to the...

Nigerian Army Gives Own Version of Police Deaths, Escape of Suspected Kidnapper in Taraba
The Nigerian Army, NA, has given its own version of...

The Agony that Retiring Professors Go Through
By Peter Wasamba It is better to face difficulties in...

Supreme Court of Nigeria: The Hiatus in Its Big Brother Role by Peter Temitope Olajuwon
Abstract The Supreme Court is the apex court of our...