The indefinite strike action declared by the Judiciary Staff Union of Nigeria- herein after referred to as JUSUN- has lasted for over eight weeks and it is still counting! The JUSUN had embarked on the strike action to compel financial autonomy of the judiciary on the Governors of States that have not complied with the said autonomy.

There are therefore those persons who have supported the strike action and to them, the strike action is impeccable as it is the right action regardless of the consequences (as to them it is a ‘fight to finish’ once and for all battle) while there are others who criticize the strike action for its negative consequences and or impacts on the administration of justice, litigants and lawyers and to these persons, the strike action constitutes impediments to justice and progress of the nation. Also, arising from the indefinite strike action and its impacts on the majority of lawyers, litigants and common man, I had called on members of NBA across Nigeria and all the NBA’s branches to boycott the month of June, 2021’s general meeting as a protest against the NBA for its nonchalant attitude and approach to its own members’ welfare and interests as far as the strike action is concerned. This protest notice would definitely not go down well with some members of the NBA, especially the leadership at the national level and some of the branches’ leadership, especially some of them who see the NBA and those who pretend to the public that the strike action does affect them too as they are also litigation lawyers. Even if you have to advise a lawyer whose income has been affected by the strike, must it be now at this ugly time that you have to advise insensitively that he should have looked elsewhere for alternative income rather than litigation?. Is that not sarcastic of the plight of the vulnerable lawyer?

That is why I had called for a boycott as a protest. Also, I need not make those members/leadership of the NBA that are not and have failed and or rejected and or neglected to be interested in the protection of the interests of their own members to be happy with the protest. I had called for the protest for the protection and or defence of the members’ interests and I had no evil or malicious intent against anyone or the NBA or the NBA’s leadership.

NBA (with due respect) has continued to disappoint majority of its own members by showing insensitive loyalty and solidarity to JUSUN which is not its own member while watching its own members suffer economically and traumatically! Lawyers can no more pay their bills and can no more feed themselves and their family despite the bad economy on ground before the strike action.

The NBA’s leadership at the national level has failed its own members. I must also state that the NBA leadership is not for the ‘a je bos (in pidgin English parlance) ’ i.e. those who have been offered to serve the members’ interests but lack the strength or the vigor to confront all challenges (due to lack of strength) to discharge their duties, except those ‘a je bos’ who can deliver. Leadership of the NBA must be ready to serve its members first and foremost before any nonmembers’ interests rather than continue to tell its majority vulnerable members to continue to bear the impacts of the JUSUN’s strike action promising fake promise that the strike would be called off ‘soon’ whereas, there is no such expectation! Also, promising its members that the leadership did not call for the strike but that it was JUSUN that called for it whereas, the NBA has publicly made statement that it supports and would continue to support JUSUN in the strike action! Members should then continue to ‘suffer and smile’.

Those who have already made it in the legal profession or because of their influential affiliations or connections or influential background would feel ‘yes!’ let us go on with the strike action! Alas! God knows how to deal with these people in His own way(s) because those who chose not to be merciful to fellow colleagues and human should definitely expect no mercy from God Almighty for having abused the privilege given to them by God. If not for God that showed mercy on me through some learned Silks in the profession (may God continue to bless them for their kindness) who have assisted me with some money (and some few acquaintances of mine too), how would I have been able to make it to this extent (though, I know that it is God’s favour and mercy on me)?! How many members of the profession have this kind of opportunities that God has bestowed on me?. Also, how long would I continue to expect donations from fellow colleagues while this strike continues indefinitely without using my own hands to work to earn and when I am not jobless and or lazy?. I repeat, ‘I am not a lazy youth and citizen of Nigeria’.

Therefore, I do not care and I do not mind whether or not any member or the leadership of the NBA is happy or sad with my call for boycott of its branches’ June, 2021’s general meeting! All that I know is that the boycott is necessary for the NBA to reason and understand that majority of its own members whose moneys it runs its administration are suffering economic hardship and taking decisions that affect its own majority vulnerable members’ interests is a betrayal of the interests of those members and NBA must stop and work out all necessary actions towards an immediate call off of the JUSUN’s strike action.

Finally, I vehemently state to NBA that we are the members of the NBA and not JUSUN and our interests matter and must be protected by the NBA at all costs.

I say no to ‘suffering and smiling’ mentality of the NBA’s leadership currently being displayed.

I resolve to boycott NBA’s branch’s June, 2021’s general meeting to protect my interests and to call NBA to order on the JUSUN’s strike action!

I therefore call on learned members of the NBA and comrades to boycott the NBA branches’ June, 2021’s general meeting to protest the unbearable impacts of the JUSUN’s strike on them and to call NBA’s leadership to order by protecting their interests and ensuring that the strike action is called off immediately. 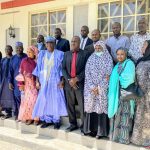 Ramadan Day 30: May the End of this Holy Month Bring You Victory and Joy Unlimited– Dele Adesina, SAN
I congratulate my dear Muslim friends and colleagues for witnessing...

CLASFON Lagos Postpones Lecture over Coronavirus, Calls for Adherence to WHO Guidelines
The Christian Lawyers' Fellowship of Nigeria, CLASFON, Lagos subregion has...

NBA Port Harcourt Law Dinner: Joyce Oduah Felicitates with ExCo and Members, Believes Event will Rekindle the Collective Desire to Promote the Cause of Justice in Nigeria
I congratulate the Executive Committee, Elders and Members of the...