On today’s occasion of the worldwide celebration of The International Women’s day, may I once again celebrate with and congratulate all the amazing Amazons on this esteemed and noble platform and other platform wherever situate in this terra, on this auspicious day and take the welcome opportunity to reiterate that equality of ability in both men and women is both an axiom and also an axiomatic principle espoused by Law everywhere and although great strides have been made in achieving demonstrable equality of recognition of ability, yet so much more needs to be done to bring societal values and attitudes towards the god given ability in women to parity with that enjoyed by men.

I wrote an article, some time ago arguing for a change in our society values and thinking to move towards a very positive consideration of the very clear proven merits and ability of women to hold the highest positions of Authority in the world and successfully lead and execute the numerous multifaceted intricacies and demands inherent in these exalted positions.

To buttress my view, I stated known historical facts has shown beyond any doubt that women are capable of good leadership. I referred to the examples of such women such as Queen Candace, recognised by both the Christian Holy Bible and The Holy Qur’an in (Surah al-Naml 27:20-44) as a wise, influential and real leader who ruled her people in a democratic way by making every decision after consulting with her ministers and advisors. She is portrayed as an equal to The great and famous wise King Soloman!

I reminded us of Queen Victoria the Queen of the United Kingdom and Ireland and Empress of India and The present Queen of The United Kingdom of England, Wales and Ireland and some commonwealth countries, Queen Elizabeth II who ascended the throne on 6th February 1952 and has been ruling for these past 68 years and is today the oldest longest reigning monarch recorded by historians.

I believe that from the above facts and figures, that covers the entire world and every race, I hope you will agree with me that women have proved themselves to be equally gifted and talented in leadership of countries.

Many of you agreed with me.

With this facts, why are we not doing more in our great nation Nigeria to fast track our able and talented women into top political positions? When they have so clearly proven and demonstrated their talent and acumen?

In my last article, I mentioned as an example Mrs Ngozi Okonjo-Iweala the current Head of The World Trade Organisation as another example of a great Nigerian woman well qualified to hold the highest position in the land.

Then, when I wrote my previous article, I indicated she was just a nominee for the position and predicted her successful confirmation, and this prediction has now come to pass. My argument then and now that women are equally as talented as men is now proven beyond doubt. In this regard, I have a powerful supporter in this view – the very tenets of our constitution stipulates that men and women are equal in the eyes of the law.

Yet when you look around at the political landscape in our society and country across the world, our powerful and pervasive cultural norms are still yet to catch up with the forward thinking objectives of our constitution. But there is hope.

We all need to re-examine our attitudes towards women and change them because although the future belongs to everyone, we already know from population census from around the world that more females are being born than males. If you extrapolate this trend into the next century, you will see that statistically, talented women who will by then outnumber men, will be in prime positions and will fill the highest positions in the land on merit anyway whether we like it or not.

Closer home, I am sure that we all want our daughters, sisters, mothers and relatives to do well and be free to pursue their dreams with our support. If a daughter or son wants to be President of Nigeria one day in the future and clearly has the ability and confidence, shouldn’t we be encouraging her and him to pursue his or her dreams to serve our country at the highest level and shouldn’t we do so the more after noting the recent appointment of Mrs Ngozi Okonkwo-Iweala and Mrs Kamala Harris of The United States of America, clearly see now that the world is changing and our daughters, wives, sisters, mothers, nieces, aunts and relatives, if given the right encouragement and conditions are capable just as we are and if given the right opportunity will do well in the highest positions of Government?

It takes just one example to inspire a generation. We see Angela Merkel of Germany has inspired a lot of people and the ascendancy of the current EU President Ursula von der Leyen is widely seen by most commentators as the fruit of the inspiration and validation of Angela Merkel leadership abilities commonly dubbed the “Merkel effect”. There are many more. What of great women like Sarah Nnadzwa Jibril, Nigeria’s first female presidential candidate both at the primaries and main elections; Virginia Etiaba, the first female governor in Nigeria’s history; General Aderonke Kale, the first female army major-general in Nigeria; the late Florence Nwanzuruahu Nkiru Nwapa, the first female writer in Nigeria and the first African female novelist to have her work published internationally; Ladi Dosei Kwali, the modern pottery pioneer who appears on the 20 Naira note; Priscilla Ekwere Eleje the first woman to have her signature appended on the naira note.

Time fails me to mention other great women such as Professor Grace Alele Williams the first female Vice-Chancellor; Margaret Ekpo the noted activist; Mrs Funimilayo Ransome Kuti the first woman to drive a car in Nigeria and the mother of the famous Fela Kuti; Mosunmola Abudu the first female owner of a TV channel and Agbani Darego the first African woman to win Miss World crown and many many great women whose accomplishments if not written down and compiled would be lost to us. In this regard, If you have any such great women of historical importance both past and present that people need to know about and are inspiring enough to be highlighted in my upcoming articles send me an email on my email address below with their names, details of their accomplishments, awards with dates and which can be fact checked to ensure authenticity.

Back to our discussion.

Sure, men and women may be different but everyone wants the same objectives of being able to live in freedom and in a progressive society where our natural resources and our god-given talents are adequately utilised and carefully managed to provide clean drinking water into every home; uninterrupted electricity power supply into every home; good roads; successful businesses; well supported industries; a country where kidnappings are reduced drastically; a land where persons and properties are safe and there is peace in the land.

The best way of getting us there is to start to get everyone to buy into fairness and treatment of everyone as equals.

Against this backdrop, you can now understand with this achievement of a Nigerian woman, Mrs Okonjo-Iweala, bagging the very top job in the World Trade Organisation and with Mrs Kamala Harris being elected to US Vice Presidency by some 81million votes why some Nigerians are now posing the question why shouldn’t Sarah Nnadzwa Jibril, Nigeria’s first female presidential candidate, or Mrs Ngozi Okonjo- Iweala in view of their clear abilities to lead and discharge their roles meritoriously, be considered as a serious potential future first woman president or Vice President of Nigeria?

Whatever the outcome, one thing remains and shines brightly like a diamond and this is Mrs Ngozi Okonjo- Iweala appointment to the World Trade Organisation is a validation of Nigeria despite the bad press Nigeria has been receiving and also a testimony that every Nigerian girl or woman with talent, leadership ability, people skills, temperament and the right support can make it to the highest office in the land.

As the late Supreme Court of America Lady Justice Ruth Ginsberg so aptly put it in her arguments in Frontiero v. Richardson, 411 U.S. 677 (1973):

“…Sex, like race, is a visible, immutable characteristic bearing no necessary relationship to ability.

Sex, like race, has been made the basis for unjustified or at least unproved assumptions, concerning an individual’s potential to perform or to contribute to society…

These distinctions have a common effect: They help keep woman in her place, a place inferior to that occupied by men in our society.

Eerily in 1837, Sara Moore Grimke widely regarded as the mother of the suffragette movement said in one of her writings circa 1837:

“I ask no favor for my sex. All I ask of our brethren is that they take their feet off our necks.”

Here we are, almost 200 years later, the same entreaties are being espoused but now more and more evidence of the clear ability, capability and equality of women have been demonstrated time and time again.

Now, in conclusion, let us accept that we all have a part to play in helping foster a culture and climate where men and women are treated equally in respect to their ability and not solely as regards to their sex and be properly guided in this area in our day to day activities.

Dr Raphael Christopher is a Lawyer and member of Enugu Bar and can be reached at lawyers1990@hotmail.com

Whether Deductions By States/Employers Without the Written Consent of Workers is Legal Under the Lab...
Justice Onnoghen: The Illegality of the Bench Warant and a Poser to the 20-Reformers
Imo, the Supreme Court Jurists and the Ills of Democracy 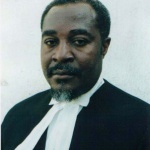