Ogun State- The Nigerian Bar Association NBA, Ota Branch has distributed palliative items to its members to mitigate the economic unease brought in by the ongoing strike embarked upon by the Judiciary Staff Union of Nigeria, JUSUN.

A statement from Chinelo Nonyelu-Olayanju Esq., the Publicity Secretary of the branch states that:

“NBA Ota Branch – the Utter Bar seized the opportunity of today the 3rd day of May, 2021 being a public holiday as declared by the Federal Government in commemoration of the Workers’ Day that fell on Saturday the 1st day of May, 2021 to share palliative for her members in order to assist them to ameliorate the effect of having not been able to work for almost a month now due to the ongoing JUSUN strike.

The sharing of the palliative was powered by the Welfare Committee of the branch while members of the branch donated generously to make the welfare pallative scheme a huge success.

NBA Ota Branch – the Utter Bar under the able leadership of J. T. Ogunniyi Esq. FICMC, has set up a Joint WhatsApp Platform between her members and the Divisional Police Officer of the Sango – Ota Police Division. The platform was created following the Seminar on Police Duty Solicitors Scheme that was organised by the NBA Ota and Ilaro branches on the 8th day of April, 2021 at Aribidesi Hall, Araromi Quarters, Ifo Area of Ogun State.

The Joint WhatsApp Platform was set up among other things to achieve the following:

The Joint WhatsApp platform consists of members of the executive of NBA Ota, the Divisional Police Officer of Sango – Ota Police Division and members of NBA Ota Branch who have indicated interest in the Police Duty Solicitors Scheme.

Uchenna Nwadialo Commiserates NBA Benin Branch over Demise of Omo Osobase Iyioha Jnr.
It is with a heavy heart but total submission to... 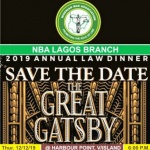