The Nigerian Bar Association,NBA, has urged Kebbi State government to domesticate the Administration of Criminal Justice Act, 2015, in order to enhance Justice delivery.

The call was made in Birnin-Kebbi, Kebbi State at the State Legislative Advocacy and Sensitization Workshop on Promotion and Domestication of Administration of Criminal Justice Act, ACJA, 2015 organize by the Nigerian Bar Association with support from the John D. And Catherine T. MacArthur Foundation held on the 15th of October, 2019, the NBA Assistant National Publicity Secretary, Habeeb Lawal disclosed.

Earlier on, in his capacity as the representative of the NBA President, Paul Usoro, SAN, Mr. Ekim welcomed members of the bar, stakeholders, speakers and invited guests and expressed optimism that the workshop will achieve the desired objective.

Mr. Victor then went ahead to give the project overview. He reiterated that, the ACJA is geared towards ensuring that the system of administration of criminal justice in Nigeria promotes efficient management of all criminal justice institutions, speedy dispensation of justice, and protection of the rights and interests of the suspects and the victim of crime.

However, he noted that, ACJA will fall short of its potential if it only remains a federal law.  In view of the need for uniformity, clarity, and better administration of justice throughout the country, it is essential for States to adopt this Law.

In his goodwill message, Acting Chief Judge of Kebbi State, Hon. Justice Muhammad Suleiman Ambursa, thanked organizers of the event and welcomed participants. Speaking further, the Acting CJ stated that the workshop couldn’t have come at a better time, assuring that he will muster the needed support and assistance towards ensuring that the Administration of Criminal Justice Act is domesticated in the State. In this direction, His Lordship hinted that under his supervision, a draft copy of the proposed Administration of Criminal Justice Law of

Kebbi State has already been prepared and forwarded to the State Government for necessary action.

Prof. Alphonsus Alubo, SAN, who was the Keynote Speaker gave an ”Overview of the Administration of Criminal Justice Act, 2015” with specific emphasis on some innovative provisions of the Act, such as:

Prof. Alubo concluded his speech by pointing out some salient sections of the Act which, in his opinion, are flawed and need to be expunged or amended. According to the learned silk, the landmark innovations of the ACJA notwithstanding, certain provisions thereof need to be amended so as to bring the Act in touch with societal realities. Some of the sections identified in this regard are:

In his contribution, the Acting Chief Judge of the State. Hon. Justice Muhammad Suleiman Ambursa made a comparative analysis of the CPC and the ACJA. According to His Lordship, the procedural bottlenecks in sections 140 – 142 of the CPC are unnecessary and as such, the relevant provisions of the ACJA are more detailed and desirable.

He went further to say that the intricacies and innovations contained in the ACJA require that the use of lay prosecutors should be abolished. In this regard, His Lordship assured participants that the State Ministry of Justice has sufficient manpower to prosecute case in all tiers of courts in the state. His lordship particularly lauded the provision of section 373 of the ACJA whereby the Attorney – General is mandated to issue legal advice following investigation within 14 days. He further added that before the draft copy of the State’s ACJL is passed into law, effort will be made to shorten the time limit for criminal trials before a magistrate’s court to less than 180 days.

On his part, Ebenezer Chidozie Oguelina, Esq, a private legal practitioner in Kebbi State, thanked organizers of the workshop for finding him worthy to be a discussant at the workshop. Mr. Oguelina who is also a former Chairman of the State Branch of the NBA, assured that the private bar in the State will collaborate with relevant stakeholders to ensure that the ACJA is domesticated in Kebbi State, albeit with necessary modifications. 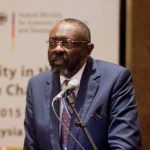 Pantami in the Eyes of the Law
by Yunus Abdulsalam The labyrinth of accusations and counter-accusations surrounding...