The leadership of the Nigerian Bar Association, NBA, Sokoto Branch has denied reports of crisis in the bar describing it as a “figment of the author’s imagination.”

In a statement on Thursday, the Branch’s executive officers elucidated on the circumstances surrounding the Ramadan package given to the visiting members by the Sokoto State Government and how it was thereafter shared equally by all.

Judiciary Staff Union of Nigeria (JUSUN) embarked on strike on 6th April, 2021 for financial autonomy. On 30th April, 2021, NBA Chairman of Sokoto Branch alongside other EXCO members, and some elders of the Bar went and delivered a message of the non negotiable stance for actualization of full financial autonomy. The letter was personally received by His Excellency, Rt. Hon. Governor Aminu Waziri Tambuwal CFR, Life Bencher (Mutawallen Sokoto).

On the 31st of May, 2021, the world was greeted by the above self-serving untrue and malicious statement coming from one blogger in the person of Bridget of Edokwe. “Neither let us be slandered from our duty by false accusations against us, nor frightened from it by menaces of destruction…” Abraham Lincoln

Suffice to state categorically that the entire piece is a figment of the imagination of the convoluted mind of the author and her cohorts. Ms. Edokwe who claims to be a lawyer ought to have verified her facts. She could have easily done so by getting in touch with key players or the executive of the branch for a well-informed reportage. Could it be that the publication was to serve the interest of well-known traducers of the branch who cry wolf in the absence of one to ensure that the community is put in confusion? 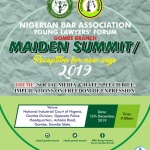 JUSUN, NBA Meet Labour Minister, Call for Full Implementation of Executive Order 10 by State Governors
As the ongoing strike action embarked upon by the Judicial...

Between Police Brutality and Brutality against Police
by Tayo Ogunbiyi The #EndSARS protests against the now-dissolved police...