A retainership agreement is one of the ways the services of a legal practitioner may be booked by a client for a particular period. By the nature of such agreements, the legal practitioner is expected to give the client legal cover for the specified period with respect to a range of legal services that may be specified. Clients tend to save more money from this arrangement as they are likely to pay more if the legal services were to be billed separately or on a case by case basis.

The advantage to legal practitioners is that they get to receive bulk payment in advance for a period for future instructions. If the client has fewer need (instructions) for the legal practitioner during the period of the retainer, it does not affect the retainership fees already agreed and paid. More so, retainerships tend to strengthen the relationship between a lawyer and his/her client.

The facts of Babatunde v. Osun State College of Education are straightforward. The Appellant – Mr Dosu Babatunde – a legal practitioner, was offered a retainership by Osun State College of Education (“the Respondent”) in 2009. He had also served as a member of the Governing Council of the School. The offer was by an Offer Letter which the Appellant accepted in writing. No formal retainership agreement was executed. There was no agreement as to the period of the retainer and no agreement on renewal of the same.

The Court of Appeal reasoned that the contract terminated at the end of the one-year period as there was nothing, either expressly or impliedly, that supports the contention that the retainer contract automatically renews. As rightly pointed out by Mahmoud, JCA, if the Appellant was able to show evidence of instructions given by the Respondent and executed by the Appellant during the period claimed, the Court may be inclined to hold that the contract subsists. Mahmoud, JCA explained (at pp. 361-362):

The situation would have been different if in Exhibit DB3, instead of the Appellant stating: “…With respect to our service as the School Legal Retainer and we thank God we have, to the best of our ability discharged diligently the functions assigned to us ever since”, they pinpointed to what actually they did or the Respondent invited or called them to do between January, 2010 and November, 2011 which would have entitled them to the fees. Then the Respondent would be deemed to have held themselves out as having renewed the retainership agreement. They would not be condoned to state that they assumed that the Appellant had ceased to be their legal retainer since January, 2010.

It is a notorious fact which this Court can take judicial notice of that at the end of every year legal practitioners lobby company secretaries of big/notable companies and parastatals to either get appointed as retainers or have their retainership agreements renewed!

This judicial notice is good for the legal business. Industry practice requires that astute legal professionals must deploy decent and strategic ways of “lobbying” for briefs and retainerships in order to stay afloat in the profession. This is part of what the business of law entails. Law firms that master the art flourish, while those who do not are left with “ambulance-chasing” and other dishonourable and unprofessional modes of winning briefs. It is the activities of this latter category that the rules of professional ethics seek to regulate in order to avoid bringing the legal profession into disrepute.

“Attack” on the Appellant

Before ending the Judgment, the Court of Appeal launched a “vicious attack” on the Appellant for pursuing the case thus far. Mahmoud, JCA vibrated (at p. 363):

I cannot end this Judgment without commenting on the attitude of the Appellant, an acclaimed experienced legal practitioner of over two decades experience. I suppose that the experience is a post call one which, if over two decades as at 2009, is now over three decades. It is an embarrassment to say the least for a senior lawyer at that to waste ample judicial time and tax payers’ money from 2011 till to date, a period of eight years for a claim of less than N2,000,000! Even if Counsel is afflicted with the highest degree of penury, what happened to charity? What happened to the NBA Policy on pro bono? What better institution to give pro bono service than an educational one involved in the education of our children? And one from whom the Appellant has enjoyed one year retainership fee for offering no known services. And also one on whose Council he was a member. What happened to social and communal responsibilities?”

With the greatest respect, it is our humble opinion that the lambasting of the Appellant as seen in the above obiter dictum was unnecessary. The Appellant genuinely believed he had a case. He is entitled to enjoy his constitutional right to approach the Court. A claim of N2,000,000 is not so insignificant. More so, the Appellant claimed some declaratory reliefs. No legal practitioner can be forced to render legal services pro bono (free of charge). Lawyers retain the right to decide when and to whom to offer free legal services.

Perhaps, the only compelling point was that the Appellant should have brought his experience to bear in seeking amicable resolution or willingly give up the struggle because he had served as Council member which was a position of honour and privilege. But that was his sole prerogative.

We agree that the Appellant’s case deserves to fail on the well espoused principles of Contract Law by the Court of Appeal.

We have seen the need to always have a proper retainership agreement. This is a more professional approach for lawyers. Assuming the Appellant reduced the agreement into a formal retainership contract, the relevant renewal clause would have been captured. This is not to say that the Offer Letter and Acceptance Letter exchanged were not enough to establish a contract.

The only point was that giving the situation, it was difficult for the Court to read into the agreement what was not expressed and not supported by the conduct of the parties. The Court rightly declined the invitation to accept that retainership agreement has automatic renewal clause implied. This is capable of working hardship on a client. The only reasonable time such renewal may be implied is where the client keeps issuing instructions which the lawyer executes in a subsequent year. 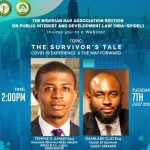 Yemi Akangbe’s New Year’s Message: May the Coming Days be filled with Success and Prosperity
Yemi Akangbe, Esq prays, and urges that we push to...

Press Release: Lagos CP Bans Policemen From Patrolling In Mufti And Commercial Vehicles, Gives Out Complaint Lines
In a move to ensure that policemen in Lagos state...

Court of Appeal Dictum on Whether a Default Judgment can be Granted where there is a Breach of Statutory Provision
In Unity Bank v. Onuminya[2019] LPELR-47507[CA], it was held that:...