“Conscience is an open wound, only the truth can heal it “~ Usman Dan Fodio.

The Nigerian Bar Association is the premium non-state actor in Nigeria. Conversely, we have not lived up to expectations. The Association itself is having a problem managing itself.

Previously conducted National Bar Elections were done in the most tardy manner, with an epileptic arrangement which tended towards almost a ruse.

I wonder where we can muster the conscience to criticize the Nigerian general elections when we are unable to conduct ourswithout hiccups and rancour.

The activities of the Association leaves much to be desired. Members cumulatively churn out billions of naira every year as Bar Practising fees and Annual General Conference Fees and there is little to show for same.

Many members die because they are unable to pay cost of treatment. Yet,yearly we gather in vintage venues Nationwide for the Annual General Conference, spending billions of Naira. When the Member dies they will ask the family to process one Million Naira,why not give him the money when he is alive? It could go a long way in saving his or her life.There is little arrangement for welfare of Members at the national level.

Welfare to the national is for booking Hotels during conferences and NEC while lawyers are very sick and some are dying.

In the midst of these we are preparing for an Annual General Conference. Can we not show some care for our members and give them some thing to take care of themselves? Without the members there will be no Bar.

In many instances members of the Association were victims of brutal Police force and chicaneries and the National Leadership of the Association, though issues press statements, but they should have taken up the issues further by following up oetitions to the Inspector General of Police against the Officers involved to serve as a deterrence to others. Such Officers should be made to face the full wrath of the Law.

The Association cannot even enforce proper remuneration for its members. The Nigeria Institution for Estate Surveyors has a template and has been able to get the regulatory Authorities to enforce their Bill of Charges, which is uniform nationwide. We ,the custodians of the law ,cannot even get kawmakers and/or Regulatory Authorities to make our Bill of Charges obligatory for clients.

The truth is, the way the profession is presently structured, if you did not have passion for it as a young lawyer, you are likely not to thrive in it. The Association must ensure that earning capacity of lawyers are increased. The only way this can be done is by Legislation. It could even for now be put in the Association Constitution, so lawyers can show it to their clients, for a Start. When we amend our Constitution, we are only concerned about elections and positions. We need a paradigm shift. Our Association is about our Members and our Members must be paramount in any thing that concerns the Association. We should not only know our members exist during the rituals of elections every two years.

The Association used to be the voice of the voiceless and the defense of the defenseless, not anymore!

Government and its institutions, glide in one impunity or the other and all we do is watch. We did not even take any independent step to ensure the Independence of the Judiciary, the fulcrum of our Legal Practice .

The President of Nigeria once had the temerity to state in the midst of lawyers that the Rule of Law is subject to National Interest and National Security in our own National Conference.

The then President of the NBA,did not refute the statement right there. He failed to stand up to be counted!

Some of our leaders have turned into lackeys of government, a willing partner in the now trivurate of oppression, while society bleeds and citizens weep.
Our members are even victims of police brutality, shenanigans and high handedness, while we put up feeble defense and just statements, that further embolden the oppressors and their collaborators.

The Attorney-General of the Federation, issues a statement rationalizing the disobedience of a court order, the NBA watches and our silence supports his legal debauchery!

By his conduct and comments, the Attorney General should be facing the L.P.DC., for Professional Misconduct and Infamous Conduct. Instead, in the midst of his affront on the Law, we call him to address us, to give an official imprimatur on his desecration of the Rule of Law and the Temple of Justice.

The Leadership of the Association, imposes high fees on lawyers without making any effort to improve the earning capacity of our members ;
We want a new NBA that will reduce the overtly exorbitant fees being charged as practicing fees and conferences and that will give us value for the money paid as Conferences and Practising Fees.

A comparative analysis of other Professional Association Fees ,shows that they pay far less for better services and Conferences.

Those other Associations also make conscious efforts to improve the earning capacity of the Members .

We want a new NBA that will fight for the rights of the oppressed and battle for dearth of oppressors.

We are the conscience of society! We show the light for others to follow.
We must also learn to allow external auditors audit our accounts at the national and local levels. External auditors appointed by members not by the leadership.

The Bar needs to raise its Bar .This is the only way that Society will take us more seriously.

A Judge dies the day He is compared with a Politician or Other Men of this World by Richarmond Natha...
Reform, Rebellion or Ruin By Sylvester Udemezue
CBN Whistleblower: George Uboh Must Not Be Locked Up And Forgotten, What He Has On Emefiele Must Be ...

IGP, Take Note: A Lawyer’s Letter to Police Boss over RevolutionNow Protest Clampdown
This is for the attention of the Inspector General of...

APGA Set To Field Northern Presidential Candidate In 2019 General Elections
The Board of Trustees, BoT, of the All Progressives Grand... 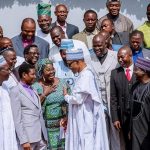