In the past few years, Nigerian Lawyers have suffered the fate of most Nigerians in the hands of security agencies. The unfortunate trend and disregard for fundamental principle of governance was extended to the Judiciary by the Executive/politicians.

In all, NBA failed to stand by its motto, mission or vision statements. Nigerians practically lost hope in that mantra that gave hope to the common man.

Every two years, Lawyers are inundated with a deluge of promises both at Branches and the National level of the Nigerian Bar Association. These promises are usually crafted in such ways that you will believe the ‘Eldorado’ has arrived for the teeming population of Lawyers, mostly the younger Lawyers.

This survival instincts just like in the secular politics is what some of the Presidential candidates latch on to garner support. But, there are evidences to show that all that glitters is not gold!

It is true that the welfare of Lawyers can never seize to be on the front burner of NBA politics, but the question is, can you place something on nothing? If there is no conducive, free and fair atmosphere to provide legal services without fear or favour, can a Lawyer’s welfare be really secured?

Should NBA go back to the old days when NBA just bites without a bark or should NBA be a elitist Association wherein every Lawyer is rich but afraid? Should Nigerians not be proud of Lawyers when they represent them or should they continue to ask “wetin Lawyers dey do sef” as we already asked rhetorically.

Someone wrote that Dele Adesina, SAN has ‘Aluta spirit’ in him and some of us who are ‘archival comrades understands that this simply means to fight for welfare of members. Rule of Law comes by struggle, it is like contesting an election where you strive to win and not strive to be given the position.

There is a general consensus that nobody can pay a Lawyer as a staff, rather it is support to take care of your needs that you receive as salary. It therefore follows that the real welfare a lawyer needs is an enabling environment to practice his trade without undue harassment as well as to be paid handsomely. Welfare is what we expect, it is not what we are known for. Rule of Law infact guarantees welfare and more.

What NBA as well as Lawyers need now is an unambiguous legal platform to achieve the real essence of the establishment of NBA. We are being given the chance to choose, let the choice be for the future of the Bar secured on a strong foundation. The rule of law doesn’t mean the welfare of Lawyers will suffer, but that its provision is embedded in that principle of law. If Rule of Law is in place, welfare will be in place!

When we uphold the rule of law, our tools are more likely to withstand the scrutiny of the society which will restore hope and trust. Relevancy of Lawyers in the scheme of things especially in this democratic settings will restore welfare for Lawyers.

Dele Adesina SAN understands the above dynamics. References have also been made about the innovations he was part of at that time when not only Lawyers were proud of NBA, but Nigerians at large. There is no doubt he also understands the jet time we are in. “For the future of the Bar” may seem ordinary like the usual campaign cliche’ but this is actually the past meeting the present and getting ready for the future!

Let us not be, beclouded with the belief that some candidates are good, but let us strive to ensure that the best candidate is saddled with the responsibility of directing the affairs of our Association. Let’s give Dele Adesina SAN, the best candidate by far, the mandate to secure the future of the Bar.

DASAN does not represent fear or favour, wouldn’t you rather agree with me? 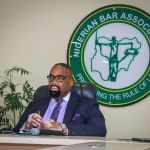