The argument among other arguments is that the Chairman of the Bar Council lacks the statutory powers to make any such amendment without the resolution of the Bar Council in that regard since the Legal Practitioners’ Act, 2004 has only conferred powers of rules of professional conducts on the Bar Council. It was also the argument that there is no RPC except the 2007’s RPC (despite the facts that the amended 2020’s RPC has been gazette)! This paper begs to defer on the submission of those lawyers, with due respect to them that the 2020’s amendment (which has not been set aside by a competent court of law) is illegal and should be disregarded and or discountenanced and that only the 2007’s RPC is valid and legal (despite the fact that the same power that ushered in the 2007’s RPC is the same power that has ushered in the 2020’s RPC), hence, this paper!

The gazette purportedly amending the 2007’s RPC is marked S.I N0.15 of 2020 issued by AGF and dated September 3, 2020, which reads in part, “In exercise of the powers conferred on me by section 12(4) of the Legal Practitioners Act Cap L11, LFN 2004 and of all other powers enabling me in that behalf, I, Abubakar Malami, SAN, Attorney General of the Federation and Minister of Justice and President, General Council of the Bar, make the following rules: “The Rules of Professional Conduct for Legal Practitioners, 2007 is amended by deleting the following rules, namely: 9(2), 10, 11, 12 and 13. “These rules may be cited as the Rules of Professional Conduct for Legal Practitioners (Amendment) Rules, 2020.”

First and foremost, it is my humble submission that since the 2020’s amended RPC has been gazetted, it enjoys the presumption of genuineness of law as a subsidiary legislation made pursuant to the Legal Practitioners Act until it is set aside by a competent court of law. More so, a court of law is an umpire and would not require any proof of invalidity unless such issue is made as a suit or complain before it to adjudicate, else, the court and of course the law would assume that all is well with the amended 2020’s RPC! It must also be borne in mind by those who wish to oppose the 2020’s amended RPC while upholding the 2007’s RPC, with due respect to them, that one cannot eat his cake and still have it and no one can be heard and or allowed to blow hot and cold at the same time as the defect being complained of against the 2020’s RPC is likely to extend to the 2007’s RPC thereby having the tendency of annulling the 2007’s RPC and thereby collapsing both the 2020’s RPC and the 2007’s RPC! If I am to recommend, I shall humbly recommend a new RPC properly made in good conscience while discarding the 2020’s amended RPC and the 2007’s RPC or any other RPC somewhere in existence.

As documentary evidence, the contents of a Gazette, as stated in the law, is prima facie proof of any fact of a public nature, which the Gazette is intended to notify. The subject to be tested for credibility, weight or cogency to determine its acceptability. In this respect, the weight to be attached to a document, like the Official Gazette in the present case, is a matter of inference to be drawn from established facts and in this regard both the trial Court and the Appellate Court are in the same position when the question involved, is the proper weight to be attached to the document. See Attorney General, Oyo State v. Fairlakes Hotels Limited (1989) 5 N.W.L.R. (pt. 121) 255 at 282 – 283; Ayeni v. Dada (1978) 3 S.C. 35 at 61 and Akinola v. Oluwo (1962) 1 All N.L.R. 224; (1962) 1 S.C.N.L.R. 352.” Per MAHMUD MOHAMMED, J.S.C (Pp. 28-30, paras. G-B).

Finally on this proposition of the presumption of the genuineness of a gazettee, in the of NEC & ORS. v. WODI (supra) held on the ADMISSIBILITY OF A GAZETTE : Whether the content of an official gazette can be admitted in evidence thus “For the purpose of complying with section 112(1)(a) of the Evidence Act, it is enough for the Gazette to be brought forth simply without a witness producing the Gazette and testifying under the sanctity of an oath. The Supreme Court has laid it down that – “It is perhaps just as well to point out here that since Notice 1258 in the October Gazette dealt with facts of a public nature and of which it was the intention of the Government to notify the public, once the document (i.e. the October Gazette containing the notice) was produced before a court – whether of first instance or appellate grade – then unless the contents of that notice are irrelevant to the matter in issue that court, having the document before it, ought to take account of it and, if need be, admit it in evidence under sections 115 (limb A) and 112(1)(a) of the Evidence Act.” The Supreme Court further observed as follows:- “Following the above principles of the law of evidence we think that their Lordships of the Court of Appeal ought to have admitted the document (the October Gazette) in evidence or, at least, looked at and regarded it as evidence and, in refusing to do so, we consider that they erred in law. In exercise of our general powers under section 22 of the Supreme Court Act and in keeping with the above principles of the law of evidence we not only looked at but also admitted in evidence (neither counsel at the hearing of the appeal objecting) the document (the October Gazette) as exhibit SC (1)”. (See Ogbunyiya and others v. Okudo and others (1979) 3 L.R.N. 318, 322, 324, 325.)” Per KOLAWOLE, J.C.A. (Pp. 15-16, paras. F-F).

Finally, it is my humble submission that the S.I N0.15 of 2020 issued by AGF and dated September 3, 2020, amending the 2007’s RPC is in the eye of the law presumed genuine and relevant as well as admissible as the amended RPC to be abided by by all persons and authorities (including the NBA) relating to its contents. In the alternative, I humbly recommend that there should be a new RPC to be made soonest rather than later!

Therefore, as for now, lawyers can from the 14th Day of September, 2020, rely and refer to the said 2020’s RPC (as amended) in the court of law or for any legal need and a court of law is bound to presume same as genuine unless it is called upon to decide on its validity and until it gives its decision either in support or against, the said gazette cannot be discountenanced and or rejected.

An Analysis of the Jurisprudential Raison D’être of a Remand Order Vis-à-vis the Right To Personal L...
Bata, American gods and the Legal Protection of Africa’s Heritage
Policing the World in the 21st Century 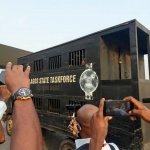 NBA Ota Branch Protests: ‘Bad Roads must be Fixed, and It is the Duty of Lawyers to Speak Out for the Masses’– Chairman
NBA, Ota branch Chairman Isaac Ogbah, says bad roads must...

‘Olu always Ensured that All Lawyers, no matter their Interests and Practice Areas, could Thrive in their Chosen Niches’- RMD Endorses Olumide Akpata for NBA President
Richard Mofe-Damijo, Esq. My name is Richard Mofe-Damijo. I am...

On Propriety & Validity Of Making An Application For Adjournment By Mere Letter Writing
"One must not lose sight of the fact that Appellant's...