By Raphael Christopher a senior member of Enugu Bar

What possible reason does President Trump have for refusing to concede victory? What could go wrong?

Well, a lot could still go wrong. For one, the present USA attorney general William Barr, has recently indicated his view that there are grounds for investigation of the election and has constituted an official investigation into these allegations. Concurrently, the Trump team are filing challenges to the election votes in the courts of the different states and those suits are still pending and not yet determined or disposed of by the courts.

Furthermore, if the matters before the courts are disposed of but President Trump exercises his right and appeals every decision right up to the Supreme Court and if the Supreme Court finds the allegations of unconstitutional mail counted, votes in the mail tampering and fraud proven before it, then the election may be ruled invalid due to unconstitutional mail tampering, fraud or mistakes on a nationwide scale or in the specific states an order could be given that all the unconstitutional mail in the ballots should be removed and recounts ordered in the affected states. This may give the victory to President Trump. Alternatively, the election may be ruled invalid due to nationwide unconstitutional mail and mass voter fraud. If this happens, we are right back to the spectre of the Gore v. Bush scenario.

In an echo of the case of Bush v. Gore, 531 U.S. 98 (2000),where the US Supreme Court decided to refuse an extension to the deadline for a recount and subsequently analysts found that a limited county-based recounts would have confirmed a Bush victory, however and very interesting was the findings that a state-wide recount would have given Gore the victory and thus the Presidency. Unfortunately, Gore became the best President America never had and it did not help that he was called the president-elect by everyone for nearly 30 days after the election!

In the case of President Trump, If the USA Supreme Court rules that the election is invalid, and did not rule in favour of either candidate, and the electoral college results are inconclusive, at that point the 12th Amendment provisions could come into play and the matter could be sent to the United States congress and senate for a contingent election based in the 12th Amendment provisions and vote to determine who will be the next President and this is done on a one state one vote basis and they vote down party lines.

Now, you understand why President Trump has refused to concede defeat to Joe Biden because if he conceded he would not have the above options available to him however should he win in the Supreme Court, he may still win the recount giving him enough electoral votes needed to win but if the 12th Amendment provisions applies, America may end up with President Biden and Vice President Pence or President Trump and Vice President Harris?

Only time will tell.

Thank you for your time.

Raphael Christopher is a Lawyer and member of Enugu Bar and can be reached at lawyers1990@hotmail.com

Federal Government condemns Isreal's killing of Unarmed Palestinians
Between Islam, Feminism, and Culture by Halima Ummi Ismail
The Fundamentality of Due Diligence in Choosing Arbitral Institutions 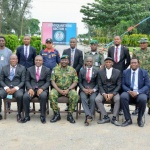 Register for the NIALS Online Training Course for Government Legal Advisers/Law Officers
As part of its corporate social responsibility, the Nigerian Institute...

MULAN| Our Message to Muslims as We Fast in the Holy Month of Ramadan 1441 A.H.
The National President of the Muslim Lawyers’ Association of Nigeria...

Cryptocurrency is still not Illegal in Nigeria: A Digital Rights Lawyer’s Perspective by Olumide Babalola
I chose this caption advisedly, in spite of my understanding...