Emperor Gabriel Ogbonna, Esq was finally arraigned in court today, Monday, 10th of August, 2020, by the Federal Republic of Nigeria after over four months of illegal detention in DSS custody.

Recall that the Federal High Court Umuahia Division, had in a considered judgment, on the 29th of June 2020, directed the DSSS, to immidiately release Emeperor.

Despite the service of the enrolled order of court on DSSS, on the 2nd of July 2020, they continued to hold him in their detention, in flagrant disregard and disobedience to the order of a court of competent jurisdiction, until today’s arraignment in court.

The prosecution had filed a charge at the Federal High Court since 17th of July, 2020, and got adjournment for arraignment for 21st of October 2020.

However, consequent upon a sustained pressure from a team of volunteer lawyers led by former 2nd Vice Chairman of NBA, Monday Ubani, a Lagos based human rights activist, the prosecution made a sudden summerassault, thereby scampering for the earliest possible date for arraignment last week.

This sudden change by the DSS, was consequent upon a contempt proceesings filed by the former NBA 2nd Vice President, Ubani, against the person of the Director of DSS.

To avert the looming danger, they suddenly made a U turn, and sought for the shortest possible date for arraignment upon reciept of the contempt proceedings.

Emperor finally took his plea upon araignment today, and the court directed that he be remanded in Correctional Centre, Kuje, pending the hearing and final determination of his bail application.

Despite a clear order of court, directing that Emperor be remanded in Correctional Center Kuje,the DSSS officials besieged the court and still insisted on taking Emperor back to their detention. However,the Prison officials, armed with the remand warrant from the court, stood their ground insisting that the order of the court must be obeyed.

The DSS officials reluctantly, upon noticing the gathering storm over their invasion of the court today, to take Emperor back to detention, suddenly disappeared from the court.

We thank the Almighty for today’s session. We also specially appreciate Femi Falana, SAN, who has always guided and called to encourage the lawyers. We also specially appreciate Monday Ubani Esq, who in his magnanimity and benevolence started these whole processes for a lawyer he never knew personally. Obioma Ezenwobodo, you are also appreciated for your sustained pressure and battles towards ensuring the timely release of Emperor. Servant 1, Clement Chekwuemeka, the amiable Chairman of Capital Bar, we also appreciate all your efforts and support. Barr Bridget Edokwe and Barr Halima Abiola, we appreciate your selfless contributions by freely giving wide publicity of the activities of the volunteer lawyers in this case. Premium Times, Daily Trust,The Sun Newspapers, we say thank you.

We also appreciate the efforts of NBA Chairman Aba, Emperor’s Bar branch! Kunle Edun, Mazi Afam Osigwe, most Learned Silks, who in one way or the other contributed towards this fight against injustice, you are all highly appreciated.

Barr Ladu of Umuahia Bar, who also fought and got a judgment in a fundamental rights action against DSS, for their illegal detention of Emperor, we pray that the Almighty, will take up all your battles and get victories for you.

We cannot mention all that have contributed towards this fight for the freedom of Emperor. All lawyers and Senior lawyers in Nigeria we appreciate your gestures towards helping a learned friend in need!

The battle is not over yet, by Tuesday next week the bail application is coming up for hearing. We enjoin you all to continue to pray and support our dear friend, Emperor!

NBA Ilesa Branch Faults the Arrest of Man who Filmed People Ordered by Soldiers to Swim in Mud
MULAN| Our Message to Muslims as We Fast in the Holy Month of Ramadan 1441 A.H.
IBA Appoints First President from Africa, Sternford Moyo 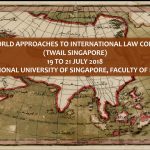 The Legal Framework for Music and Movies Production in Nigeria
By Ilepe Oluwatimileyin V. Abstract  Have you ever pondered whether...