The Chairman of Young Lawyers Forum of the Nigerian Bar Association, NBA-YLF, Anaocha Branch, Anambra State, Goshen Abuchi Ogbachalu, has vowed to mobilize young Lawyers across the country on protest to the Police Service Commission, PSC, and Louis Edet House, Abuja to register their displeasure to the PSC Chairman and the Inspector General of Police on what he termed “Man’s inhumanity to man and conduct unbecoming of a Police Officer”.

Ogbachalu lamented that there are certain things that cannot be seen, except with the eyes that has wept and when injustice becomes a law, resistance becomes a duty. So let it be with the unprovoked, undignified, degrading, shameful, disgusting and unprofessional conduct of one Police Constable Eboh, serving at Onitsha Police Area Command and who is also the Orderly to the Assistant Commissioner of Police, Onitsha Area Command and his colleagues as shown and seen in the video footage.

The Chairman said the video footage of the 11th day of October, 2019 showing uncultured, unprofessional conduct and incivility to members of the public of two overzealous Police Officers, is a national embarrassment and should be condemned by every patriotic Nigerian.

He thanked the maker of electronic evidence of Friday, 11th October, 2019 and charged young lawyers all over Nigeria to stand up against Police brutality meted on O.J. Obasi Esq. as an assault on one lawyer is an assault on all.

Remittance of Percentage due to NBA Branches will be made within Two Months– Banke Olagbegi-Oloba, N...
NBA Ikere-Ekiti Maiden Law Week| The 21st Century Lawyer Beyond Litigation: A Professional and a Cit...
Lawyer Jailed by Magistrate: NBA Abuja set to Move Application for Reversal of Detention Order 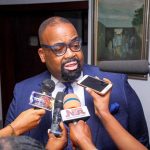 We Must Keep Our Communities Safe– Stephen Onimisi Obajaa Esq
I got home to the warm embrace of my wife...